What Are the Common Misunderstandings of Drinking Water?

The number of cases of “water intoxication” in hospitals in many parts of Europe has doubled this summer as temperatures in the northern hemisphere continues to rise. Under the high temperature, some Danes drink a lot of tap water to beat the heat, resulting in illness.

At hochbell, for example, there were 10 times as many cases of water intoxication this summer as in previous years. Local doctors say that drinking too much water increases the amount of water in the blood and reduces the amount of sodium, leading to salt and water imbalance. Severe imbalance can cause “hyponatremia,” which can cause brain swelling, headaches and even seizures, shock and death.

It’s a myth that drinking pure water alone will not replace the missing electrolytes, and even further dilute the concentration of electrolytes, resulting in an imbalance in the proportion of water and electrolytes in the human body, and different levels of stress response in the body.

There are many more myths about drinking water.

One is to drink water too fast. Replenishing a lot of water in a short time can aggravate the burden of organs such as heart, kidney, which is easy to cause headache, oedema, and rising blood pressure.

The second is to drink icy water. When the human body temperature is high, it is best not to drink water under 5 ℃, drinking cold water can stimulate the stomach, causing stomach cramps and diarrhea. 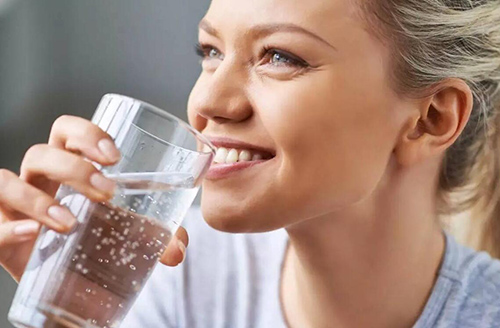 2. How to Drink Water Properly?

1) Follow the principle of“Drink a small amount of water each time, but on a regular basis”: Take 100~150 milliliter water at a appropriate time in half an hour, instead of drinking it all in three minutes. Drinking water mouthful is more thirst quenching than gulping water.

2) There are four best periods to drink water. Each day after getting up in the morning, around 10am, 3~4pm, and before going to bed in the evening, are generally recognized as the four “best drinking time” of the day.

3) Drink at least 1.5 liters per day. According to the dietary guidelines for Chinese residents (2016), adults are recommended to drink 1.5 to 1.7 liters of water per day.

4) Drink after water treatment. For most communities, potable source waters are treated within public utilities to ensure acceptable water quality. The application of modern water treatment processes had a major impact on water-transmitted diseases, and these processes prevent customers from catching waterborne disease.

The most common treatment process for surface water treatment consists of water disinfection, coagulation, flocculation, sedimentation, and filtration. The safe drinking water requires a holistic approach that concludes the source of water, treatment processes, and the distribution system.

The market for drinking water treatment technologies is growing because of limited freshwater, and our oceans are tapped to accommodate world population increase and an improved standard of living in the modern world. Filtration and disinfection technologies for drinking water were developed, implemented, and optimized during the twentieth century. Considering the support of a sustainable world, the water industry in the twenty-first century is focused on building water treatment system and distribution system.

To learn more about drinking water, ozone water treatment technology and ozone water purifiers, you are welcomed to visit our website. https://www.nbnicoler.com/