Ozone sterilization is an important technology, which was invented by German chemists in 1840 and used in the water treatment industry in 1856. Today, ozone has been widely used in water treatment, air purification, food processing, medical treatment, aquaculture and other fields, which has greatly promoted the development of these industries.

Ozone is a strong oxidant, and the sterilization process is a biochemical oxidation reaction. There are three forms of ozone sterilization.

1. Ozone can oxidize enzymes that break down glucose in bacteria and inactivate the bacteria.

3. Ozone penetrates cell membrane tissues and invades cells. And it acts on lipoproteins in the outer membrane and lipopolysaccharides inside, which causes the bacteria to dissolve and die.

O3 is a gas, it can quickly diffuse into the entire sterilization space. Ozone sterilization is a bacteriolytic grade method, which sterilizes thoroughly and has no residue. It can not only destroy botulinum toxin, but also kill bacterial propagules, spores, viruses, fungi and so on. In addition, due to its poor stability, O3 will soon decompose itself into oxygen or single oxygen atoms. A single oxygen atom can combine to form oxygen molecules on its own without any toxic residues. Therefore, O3 is a non-polluting disinfectant.

The traditional sterilization and disinfection methods have the disadvantages of large workload, residual pollution or odor, and it may also damage human health. For example, when disinfected with ultraviolet light, it has no effect in places where it is not exposed to light, and it has the disadvantages of weak penetration and short service life. Therefore, the ozone water sterilizer is currently widely used ozone water treatment device.

The function of ozone water purifier

There are two ways for ozone water purifiers to act on pollutants in water.

Ozone in the ozone water disinfector produces hydroxyl radicals and reacts with organic matter in water to purify water. The indirect oxidation reaction is quite fast and can react with various pollutants.

The ozone generator can be used to treat industrial sewage and domestic sewage. It can kill harmful organisms such as bacteria in sewage, and it can also oxidize and decompose harmful substances in sewage.

Moreover, the ozone water sterilizer can also retain beneficial trace elements and minerals, which is beneficial to people's health. After filtering in the machine, it can produce direct drinking water with good taste. Therefore, it is very necessary to have an ozone kitchen water purifier at home. 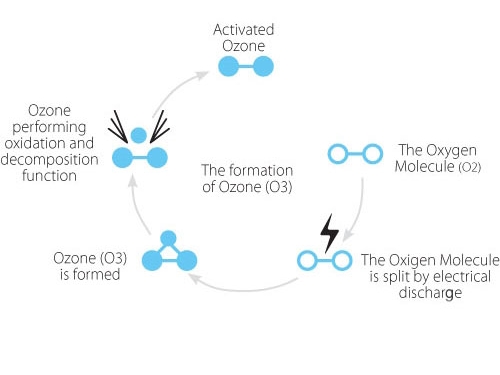